Have you heard? Craft Beer Cellar is coming to Waterbury soon. Making the already booming beer scene even more impressive. It just keeps getting better baby! Have you visited any of the Craft Beer Cellars locations in New England? Love these stores. Amazing people, great products, filling a nice need in the #VTbeer scene. Glassware, beer, other swag will fill the shelves. Give them a follow over on Twitter to keep up with the progress. Can't wait to see the shop.

Since this last post Alchemist is still killing it and has tripled brewery production, still can't keep Heady in stock. It's amazing the success they have had. Oh yeah, and the Pig is brewing now? Huge win! I'm sure I've missed some other developments in town but bottom line, go to Waterbury ASAP and enjoy.

Cheers!
---
the following was posted originally back in May of 2012:

Yep....you heard me, little old Waterbury, VT a mere 40 minutes south of Burlington, VT is a glorified and righteous craft beer goldmine. With a small population of around 5K this is not your average beer town, but they know what is up.

Iconic home to Ben & Jerry's and Green Mountain Coffee Roasters the town has a great vibe, community spirit, and culture that I love. I had been going to the Alchemist Pub & Brewery for years, in fact my last meal and drink I had there was the night before Tropical Storm Irene changed everything. The days and months that have followed Irene have set in motion many changes in the town, and although recovery continues there is still a long way to go.

A big loss for the craft beer community and in general was The Alchemist, and although poised to reopen months later, owner John Kimmich opted to focus on the cannery and closed up the brewpub for good.  I miss it dearly, as do many however, just over a year later the town is heading in the right direction and the craft beer scene is HUGE!

Within just doors of each other exist 3 of the best beer spots in the State. Prohibition Pig,  The Reservoir Restaurant & Taproom, and Blackback Pub & Flyshop. 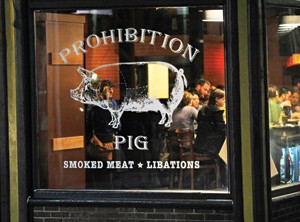 The Pig, recently opened in the former home of the Alchemist is finding it's groove and with 24 taps and servings available in full or half-sizes it is a must visit. Chad has done a killer job. Some folks wanted it to be the Alchemist again (time to move on), but the only reminder is the familiar stained glass beer on the back wall. Otherwise its a whole new feel, with many of the former Alchemist staff. The food is outstanding as well. RecentlyI visited for a  Dieu Du Ciel tap takeover, which in my opinion was a great success. More events like this are on the way including Hopfenstark and Allagash (on my birthday no less)! See their Facebook page for more details on those events!

The Rez, former home of Waterbury Wings has 38 taps, a bomber menu, and a ton of tasty food (get the stupid hot wings, you won't regret it!) Great selection, you never know what they might have on tap! Last night for example I was delighted to see Art of Darkness, a Belgian Dark Strong by Ommegang Brewery. Vermont beer lovers can get a sampler on the cheap, and in general the draft prices are exceptional. ($5.50 for Old Rasputin? yeah!) Check the website for updated list, or follow them on Twitter @thereservoirvt

Last but not least is a little gem for beer lover and anglers alike, with a double-digit tap list and a love for Hill Farmstead and Lawson's Finest Liquids this bar is not to be missed. Right now (05/12) their Facebook page shows they are pouring 6 HF and 4 Lawson's Finest, a completely UNHEARD of opportunity for lovers of the craft.  Generous pours in beautiful glassware and great conversation with the owner makes this a favorite of the locals (and me!).

Waterbury is full of life again, and has so much to offer in such a small town, especially for craft beer lovers and fans. Make sure you stop in and say hi, have a drink or two and support the local economy as it continues to rebuild and rebound from tragedy. Stop by the cannery (on your way to Ben & Jerry's perhaps) and grab some Heady Topper, it's just a mile or so away from it's former location.