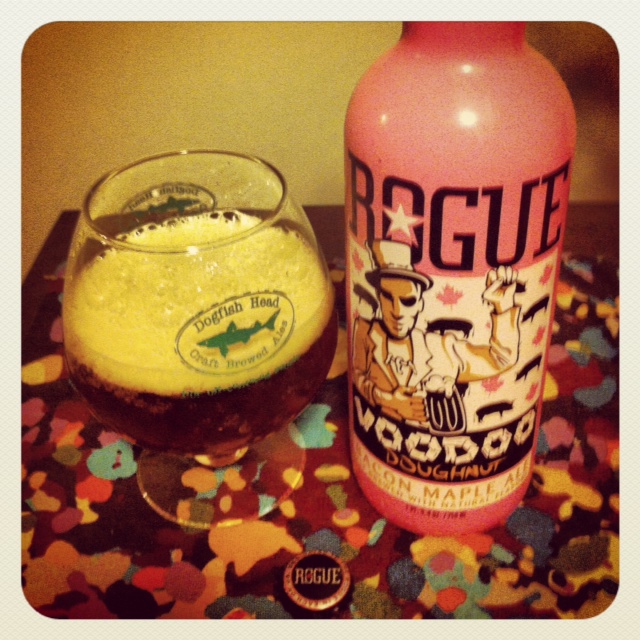 Many great beers have been had since I last wrote, too many to count. However recent highlights that I would advise you to find if possible include Rogue's "Voodoo Doughnut Bacon Maple Ale", a really fascinating brew that must be tried to believed. Granted, not for everyone but a really unique example of what beer can be (in this case breakfast, no joke it is a bacon delight!) I also believe that Sierra Nevada's "Narwhal" is the "best bang for your buck" IRS available to the masses right now. At less than $3 per bottle I  think this is a steal, and suspect it to age like a champ.

Anyways, not much of a topic today. Just want to reflect on some things happening in the industry, and mention some "grinds my gears" things that I just can't let go of.

First of all, dear Magic Hat. Please make sure beers are available to the local market before the left coast gets it? I was fighting to find Heart of Darkness (exceptional stout by the way, get it in the winterland variety pack.) I saw via Instagram buddies and untappd that folks around the country were enjoying it, but the #BTV market could not get it on the shelves or at the Artifcatory until several days, in some cases a full week later. I've been looking forward of the return of this beer for a long time! Magic Hat has grown, I get that and they aren't what they once were. However, they still have a great local appeal here and this was a disappointing experience. Then they released a special VT only brew (Maple Chocolate Stout) and posted a picture of a growler on Instagram. Excited to try, and drove to the Artifactory after work only to find it was a fail at marketing, wasn't up yet. I know logistics and shiz get involved but come on. Really?  Still looking forward to try it nonetheless.

Next, yes it's a bummer what is happening at Goose Island. Sad to see Hall cross the party line into the darkside with InBev. However, having recently had this years Bourbon County Stout, and Christmas Ale. They are really tasty, and if they keep producing quality beer like that you won't see me foolishly boycotting them in some holier than thou statement of beer snob righteousness. Hopefully the small batch stuff stays small, and the big guys keep feeling the pain of the craft-beer growth.

And finally, did you watch the Stone Vertical Epic live tasting? Very jealous, no doubt but man does the owner seem very fittingly like an Arrogant Bastard. Good thing he still makes killer beers.  I was impressed that the panel felt most of them held up, but wonder what there real opinions might be. I'm sure those will come out soon. In the meantime, if you are in #BTV hit up the Beverage Warehouse. A bunch of the Stone 12 oz bottles like Chipotle Porter, Vanilla Bean Porter, and one of the collaborations are on sale for $1 and $2 dollars.

That is all for now. Heading to Hill Farmstead for some new brew, and old favorites (Twilight of the Idols!)

Until next time, cheers!