Get a drink at the Winooski Motor Speedway this Summer 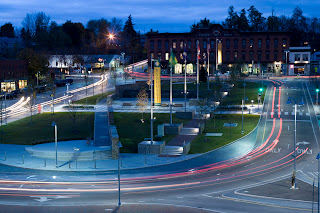 Yep, you read that right. And I'm quite frankly just as surprised as you. However with the addition of The Mule Bar the 'newsk ('noosk?" has become the hot spot to get a drink, and catch a race (well, sort of). I wish I could find the guy that made that Winooski Motor Speedway shirt, priceless and he deserves a shout out. Anyone? (update! Thanks Dave & Michelle, the artist is Steve Hadeka and you can purchase the shirts here!

Winooski, always a good spot for a cheap drink (CK's, McKees, Donny's) but has recently blown up into an all out craft beer experience. Surrounding the worlds oddest rotary the lineup of of good eats, and great beverages has really come a long way from the days of 38 Main (more on that later).

A few months back, The Monkey House announced a revamp of their draught lines (over 20 now!) and have had a ton of great beers on tap, including for all of you out of towners Hill Farmstead. Love this bar, way back in it's infancy it was where I had one of my first legal beers. Win. Only gripe is they charge a cover virtually every night, and generally the music is simply not my bag. I'm a "here for the beer" type of guy. I'd drink more and spend more to not have a cover.

If you start early get the Bloody Mary at Sneakers. If you hit Our House for dinner they typically have at least one seemingly out of place great beer (good eats protip: get the 3 Little Pigs, you won't regret it!!) Just up the hill the former food truck sensation Misery Loves Company opened up shop this summer, there you will also find great beer and cocktails. The food is great as well, but I prefer it out of big red. RIP.

A standout drinking spot, actually doesn't even offer beverages but you can't argue with BYOB and Thai! Well...you could but don't, it is the exact right combination of pure joy. Just recently enjoyed some take in Heady Topper, and random "fridge beers" from a buddy (follow him @shanem13 on twitter.) though I assure you he is not as interesting as me! Just kidding homie, cheers! Hops and Thai are a killer combo that I assure you will make your palate sing with happiness. Don't expect glassware to be very fancy though! 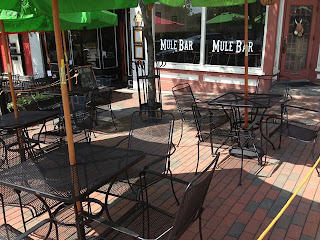 Recently the fine people from Three Penny Taproom in Montpelier, VT decided to lay the cornerstone to the first turn at the speedway and opened up The Mule Bar. Formerly a Vietnamese spot (apparently a decent one, but never tried). Prior to the Mule the last suds served were at 38 Main, a dive bar I really enjoyed back in the day.Lots of fun nights there when my good friend @amybtv (follow her on twitter) lived in pre-traffic circle hell Winooski.

The Mule has 16 lines of ever changing pure joy. Not to mention a killer bottle list, just ask the fine folks there (yep talking about you Andrew and Michelle) will hook it up. Beer not your thing (why are you on my blog??) They have an ever expanding thoughtful cocktail menu as well. I haven't tried the food yet, but if it's anything like TPT then I'm sure it's outstanding. For me though, it's all about the beer. They run through kegs quick so the list changes often be sure to check them out on Facebook to stay up to date.

So if you don't feel like hitting Burlington up I'd suggest giving Winooski a shot, lots of great food, tons of great beer, and the thrill ride of your life travelling around the "round-about" as fast as you can. Parking isn't ideal, but there is a garage across the street somehow people don't realize exists.