Like many of you I'm sure, social media plays a pretty significant role in my life. Perhaps not, but it is how I stay connected to those things that are important to me like family, friends, and yep you guessed it BEER.

I'm a self proclaimed beer geek, and my obsession for the sweet nectar of life goes way beyond the bottle. These days I find myself researching, tweeting, and sometimes dreaming of my malty mistress. I passionately follow beer bars from beyond the borders of VT, many that I've frequented like The Pony Bar, and Rattle & Hum in my second city NYC. Many others that I've never stepped foot into but hope to some day. I follow the ebb and flow of the draft line, one keg down another comes up like I was at a sporting event. Thus far my favorite Vermont stomping ground The Farmhouse has yet to move far beyond simple events on Facebook, but the other great beer bar in Vermont Three Penny Taproom in our state capital does find time for the occasional tweet.  For the most part though, my great state is slightly behind on the social media bandwagon.

Recently I've discovered social media apps like Red Pint, and Untapped that feel a little like Foursquare with a purpose for me. Although I'm likely one of just a handful of users here in the great Green Mountain State I still feel compelled update my status even though nobody but my brewing buddy would likely see. Not surprisingly the more I drink the more I update, what is the motivation for that I wonder? I might check into a bar, then tag myself on Facebook, and then add a beer and review on Red Pint. This is madness.

Oh yeah, and now I apparently blog about it.

Enjoying a very limited bottled release of Trout River Knight Slayer, part of the Darkside series.  Delicious, if you can get your hands on some I'd recommend it. Previously I only had this beauty of an Imperial Stout at the Vermont Brewers Festival.  Pours nearly opaque with very little head into a snifter, smells of slight ethanol and coffee notes. Pretty easy drinking for an Imperial, gets even better as it warms up just like any other brew of this variety.  Check it out, I think you will dig it. 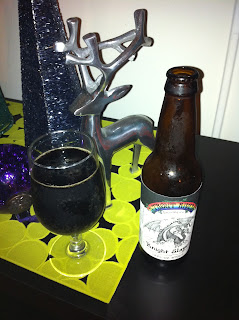