Recently my wife and I retreated to the coast of Maine for what I called a "sanity break" but it quickly turned into quite the "Beercation!" Vacationland, as its know is one of my favorite places in the universe. Something about the cold Atlantic ocean, crashing waves, and coastal communities is such a draw for me. I figured we would have our fair share of brews while on our little 4 day excursion, but the weather was not amazing so we had everyone elses share as well :)

A couple months ago we hit Portland and visited spots like Gritty's, Sebago, and a couple others but discovered one of the great beer bars of the east, perhaps anywhere. Novare Res Bier Cafe! Wow! If you find yourself in Portland, this is a must. Phenomenal Euro heavy draught list, and a bottle list so vast they even have a section for "beer geeks." How awesome is that? We of course, hit the place again on this trip and again was can't miss. Had some very unusual and hard to find brews from the UK, Spain, and the Netherlands. 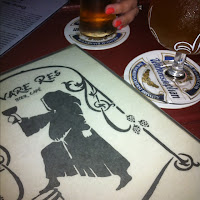 Earlier in the trip we discovered Boothbay Craft Brewery thanks to a sign in the harbor that just said "brewery" and pointed left! A little 3 beer brewery and resort (great idea!) We sampled a couple of delicious options and spoke with the owner and his wife both apparently good friends with Sam Caligione of Dogfish Head fame.  Great people, very good beer! Look forward to going back and staying with them sometime, check them out. We grabbed a growler to go, which I later enjoyed on top of Cadillac Mountain (among other places). 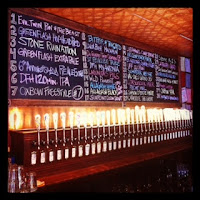 Somewhere along the way, we drove a bit south to Brunswick. Not much of a town, but I had heard about this place call the Lion's Pride. From the outside, it looks like an Asian Restaurant that might only serve cheap Sake and Sapporo but I could not have been more wrong. This place is phenomenal and rivals some of the best beer bars I've ever been to. 30 plus on draught, nothing bad at all. Again, just like Novare a great bottle list. We were in a rush, but wish that wasn't' the case I could have stayed there all day. Can't wait to go back.

Next up we went north to Bar Harbor, and thanks to my new favorite beer app, Beerbuddy (more on that in a blog to come) I was able to quickly locate the best bars and spots in town. We had a great time at the Atlantic Brewing company, worth a visit for sure. Beers are all tasty, not amazing but the BBQ joint attached certainly was! A brewery and pit BBQ is a match made in beer heaven. If you go, be sure to try the Manly Men series, especially the braggot. Awesome! 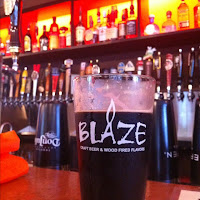 Later, again thanks to my new app BeerBuddy we found craftbeer glory at a unassuming spot called Blaze. The bartender was super knowledgeable, and we sampled a few other local offerings I had not heard of like a Demon Stout from Black Bear Brewing company out of the Orono, ME area. Delicious.  A couple others as well that were great, I would have to look back in Untappd (another kick ass beer app) to find out what they were. We also visited Bar Harbor brewing company, which is pretty much the same as Atlantic and as I understand are owned by the same place. Beers very similar with the edge going to Bar Harbor for Cadillac Mountain Stout. Mighty tasty! 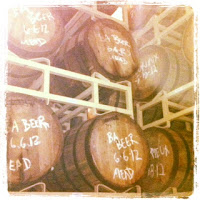 Finally back in Portland we got the chance to tour the Allagash Brewing Company, that was fantastic. I have never in my life seen such generous sample pours. The tour was thorough, and fun. Best part was checking out the barrel room. The Beeradvocate collaboration was visible, as was Curieux the delicious barrel aged Tripel. One of the better brewery tours I've been on, worth reserving tickets (free) for online. Just outside of the Old Port, but an easy drive. Was surprised to learn that they get 120 Jim Beam bourbon barrels a month, among other cool facts!  After the tour we hit the Great Lost Bear, another sweet beer bar/restaurant. Liz and I rocked samplers that were very well priced and continued to tour the regional beers including Oxbow, and Rising Tide both from Maine. Food was quite good as well. Highly recommend this spot.

Bottom line, if you know where to look Maine can be more than just a coastal vacation it is a solid beer destination. They have a lot of tasty breweries, something for everybody.  Look forward to going back.  What are your favorite Maine beers? What spots did I miss? Love recommendations, I'm only 3-4 hours away by car so I'll be back.